Agility, resilience and autonomy are fundamental for military forces operating in the field and engaged in combat away from their permanent bases. But operating under these conditions poses significant challenges with ever-increasing energy consumption, increasing weight, and reliance on complex systems that require experienced operators and a logistical tail for supply and support.

A new platform developed by Plasan could provide a solution to some of these needs. At Eurosatory 2022, Plasan is showcasing the All-Terrain Electric Mission Module (ATeMM), which provides a range of services to improve the autonomy of tactical units, especially in load-carrying, power supply and robotics operations. In fact, ATeMM is positioned to provide a “multitool” of mobility and autonomy useful in many use cases.

Although it looks like a trailer, ATeMM represents a new class of mobility – unlike anything we know today. To understand its potential, let’s look inside. The system combines a carrier plate, an automotive system and an electrical energy storage pack. The automotive system uses a single axle, two wheels with independent suspensions, brakes, differential and electro-hydraulic steering. The axle is coupled to a 190 HP electric motor/generator. The system can move the wheels or generate electricity in motion, to charge the battery which stores 35kWh of electrical energy. All systems operate automatically and are controlled by an on-board operating system.

Unlike other trailers, when the ATeMM is connected to a standard 2×4 or 4×4 vehicle, it transforms that vehicle into a 6×6 electric hybrid. When two ATeMMs are paired together, they turn this vehicle into an 8×8. Two, three, or four ATeMMs can also operate autonomously as unmanned ground vehicles (UGVs). This is only part of the versatility that the ATeMM is capable of.

Users can select three working modes. In economy mode, ATeMM conserves energy through regenerative motion, with electricity generated and stored as the vehicle decelerates, as in other hybrid electric vehicles, when the driver presses the accelerator pedal, ATeMM adds electrical power to support the vehicle. In charging mode, the ATeMM is charged by the movement of the vehicle. As fuel consumption increases, the efficiency of the electrical power generated is much higher than that of on-board generators.

The third Power Max mode provides maximum power to increase the momentum of the host vehicle, when the trailer is pushing the vehicle. This mode allows a standard 4×4 to achieve much improved off-road mobility and obstacle clearance. This capability also allows vehicles to be stealthy by eliminating engine noise and maintaining a quiet standby for many hours without draining the vehicle battery.

The patented three-point twist-lock quick connector system allows the trailer to become an integral part of the vehicle, allowing the driver full maneuverability in tight forward or reverse turns and high-speed steering. The 1950mm wide trailer is air transportable in helicopters and tactical airlifters, its height is adjustable to suit different vehicles. Plasan is also considering a smaller 1,650mm wide version to match the all-terrain vehicles (ATVs) that will be air-transportable in the V-22 tilt-rotor aircraft.

The military needs large amounts of energy to support the forces on the ground. Communications, displays, computers, electro-optics, electronic warfare, missile launchers, drones and other electronic devices require a constant flow of electricity in the form of fuel, generators or batteries, to be pushed towards deployed units. To maintain their momentum, they need a lot of energy in an easily usable form to charge the battery or power other systems.

ATeMM is equipped with multiple options to generate and supply electrical energy. When in motion, it regenerates up to 26 kW of electricity. The ATeMM regenerates up to 60% of the energy consumed by the vehicle during travel, energies that were primarily dissipated in the form of heat loss and other forms of energy. When towed behind a host vehicle, it generates 15kW during braking and coasting regeneration). With this regenerative braking and coasting regeneration, the ATeMM arrives at its destination fully charged, despite powering devices during transport. It also has flexible output options supporting 24VDC, 110/220 AC, etc. To store the energy on board, the ATeMM uses LiFePo T6 lithium batteries offering standard efficiency at a high level of safety, for maximum storage capacity a new lithium-ion system is used, where each segment is submerged in liquid to prevent battery runoff in case of damaged battery. Utilizing an intelligent power management system managing the on-board battery bank and the regenerative energy produced while the vehicle is in motion, ATeMM provides the user with an efficient outboard power source. For example, this energy supply exceeds the needs of an advanced command post often supplied by tactical generators. To ensure continuity, two generators run continuously, doubling fuel consumption. Using a single ATeMM, the vehicle’s engine can be used as backup power. 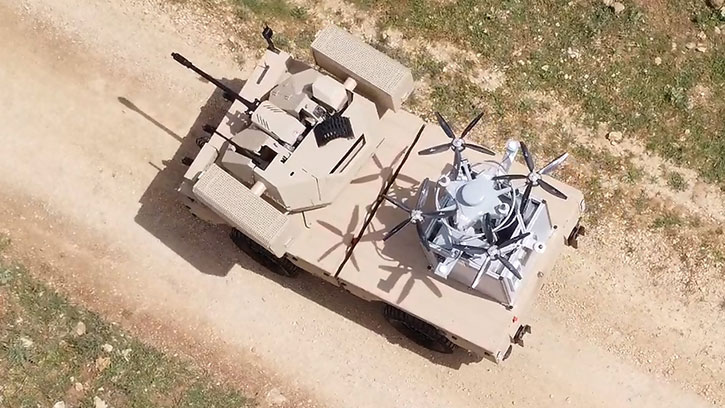 Another aspect of the versatility of the ATeMM is pairing two units in unmanned vehicles (ATeMM-T). Unlike other UGVs that require robotics specialists to load, transport, disembark and configure, upon deployment, ATeMMs are simply towed by vehicles and deployed by troops to begin their mission. Up to four ATeMMs can be connected to form an 8×8 robot that can carry weapon stations, missile launchers, sensors on a telescopic mast, Counter-AUS systems, etc., with an all-electric drive providing a power equivalent to 800 HP. When not in use as a robotic platform, each unit can be decoupled and act as a power supply, delivering up to 100kWh to support other systems. 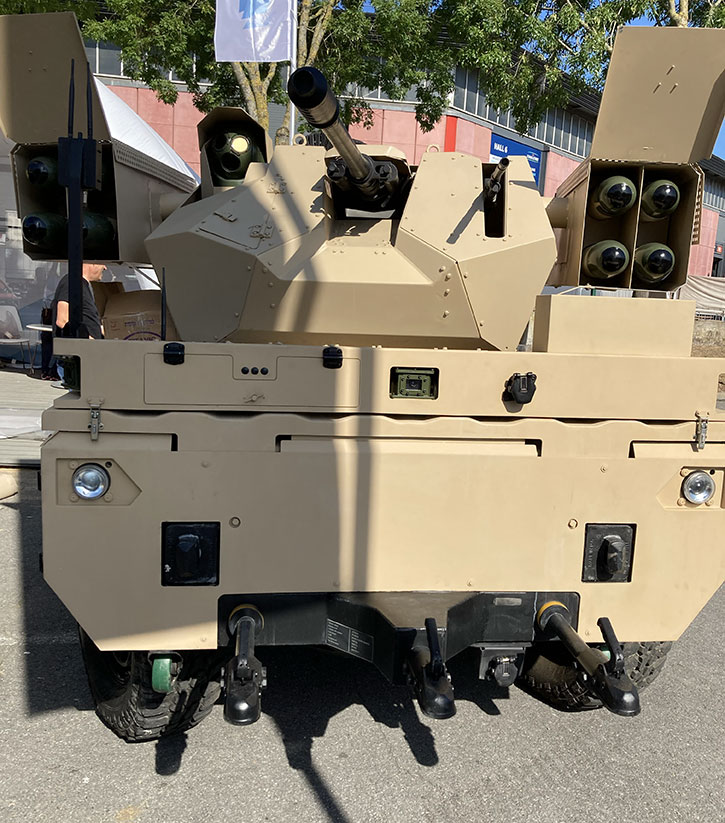 As a tandem, ATeMM-T can be detached from the host vehicle and operated via remote control, allowing unmanned movement with low signature (heat, noise). The ATeMM-T can carry twice the payload of the ATeMM (2.3 tons), storing an increased energy reserve of up to 70 kWh. Another advantage of the system is its ability to deploy with its payload as a stand-alone unit, thus avoiding complex and costly modifications to the host vehicle.

ATeMM is as far from your grandfather’s trailer as a smartphone is from the telephone of the 1950s. It provides many services for mobility, energy supply or system integration on vehicles, but its contribution the most important is to add flexibility, agility and resilience to military forces in the field, where they can improvise and use it in their missions as a useful multitool. .

There’s been an endless supply of inspirational sports movies based on true stories over the years, and another one to watch is The Phantom of the Open. The new golf-centric tale is directed by Craig Robert and written by Simon Farnaby, based on Farnaby’s book of the same name which he co-wrote with Scott Murrayon […]

Moon Knight receives a trailer on ABC during the NFL Playoffs this Monday. The DIsney+ series has been rumored to be coming sooner than expected, and it looks like those whispers might carry some weight. On the network this weekend, a promo for the MCU TV show aired on Monday. Comic book fans are excited […]

Husband and wife duo James Wan and Leigh Whannell directed and wrote the 2010 horror thriller Insidious. The Lambert family is the subject of the film as they attempt to escape the evil spirits that seem to follow them everywhere. The child of these animals, Dalton, is in an inexplicable coma, and they have a […]